The chambers are capable of reaching immense pressures of 700 and 1000 bar respectively – equivalent to up to 10,000 metres in water depth.

They will be used to test a range of underwater equipment including subsea modules and Remotely Operated Underwater Vehicles (ROVs).

According to Owe Hagesæther, CEO of the GCE Ocean Technology business cluster, the chambers will unlock new possibilities for companies in Norway and beyond.

“NUI will now be able to offer independent testing and verification of tools and equipment that will operate at great depths, to both Norwegian and foreign players,” he said. “We see today that oil extraction takes place at depths around 3000 metre water depths.”

NUI’s Asterix and Obelix chambers are the latest addition to an already broad range of testing and prototyping facilities available in Greater Bergen. 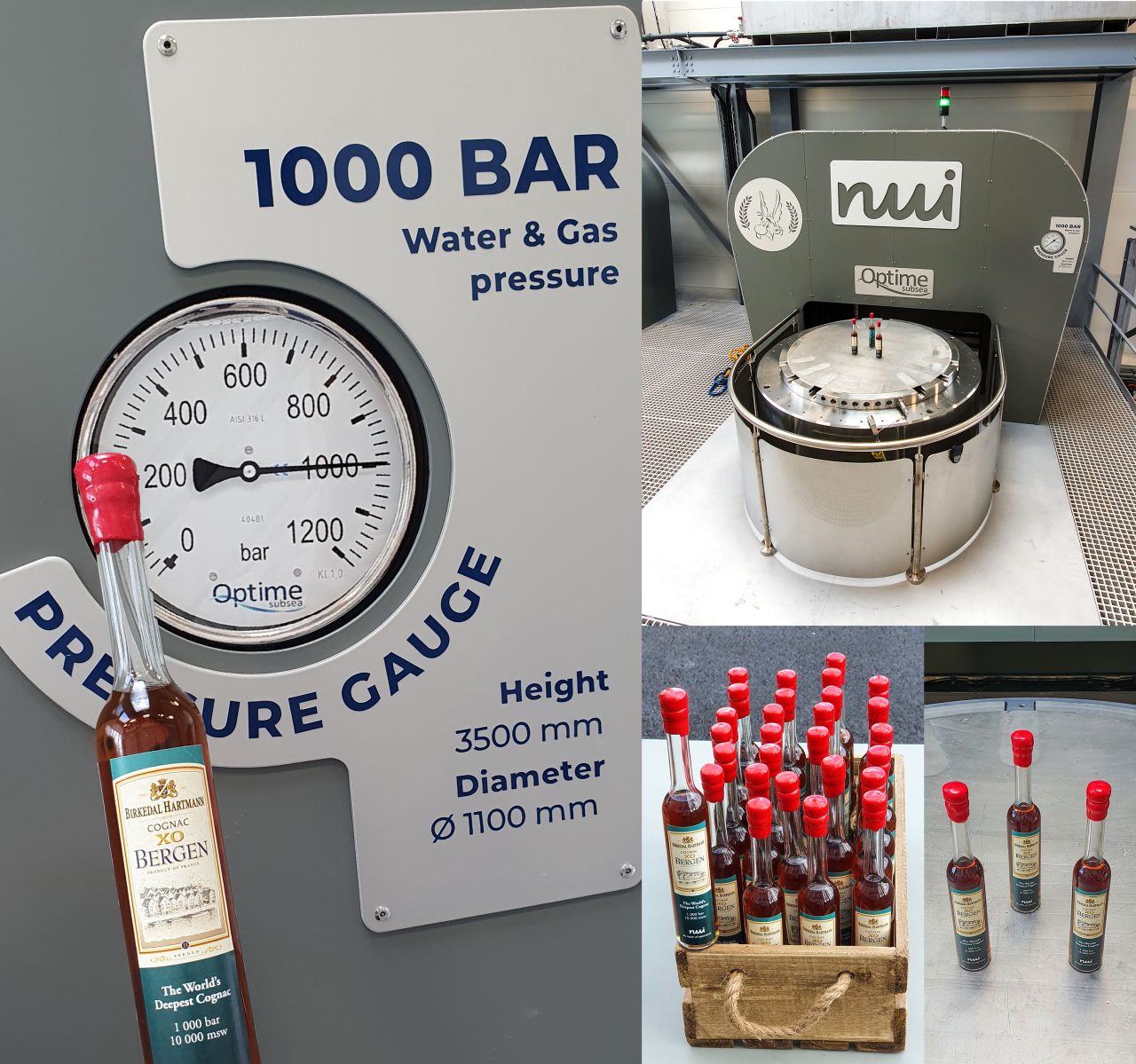 NUI also unveiled a very special edition of Bergen Cognac XO, which had been pressurized to water depths of around 10,000 metres in one of the company’s new pressure chambers. Photo © NUI AS

Rolf Røssland, Managing Director of NUI, provided guests with a guided tour of the facilities after the opening ceremony.

He also unveiled a very special edition of Birkedal Hartman Bergen Cognac XO, which had been made with the help of the Asterix pressure chamber.

He explained that the cognac had been pressurized to approximately 10,000 metres of water depth – making it officially the “world’s deepest cognac”.

The company had a lot to celebrate, after overcoming a number of challenges along the way. The 3.5-metre tall chambers had to be manufactured in Italy, and transported to Norway during the global Covid-19 pandemic.

Now that they are finally in place, the chambers will make it easier for businesses to test equipment for deep-sea research, oil and gas extraction, and even underwater mining in future.

Røssland noted that companies would previously need to travel as far as the UK to access this type of facility. “Now, they can come to us instead,” he explained.

During the guided tour, guests were introduced to some of NUI’s other test facilities. The company specializes in testing equipment under high pressure and harsh conditions, such as those found in the Norwegian North Sea.

NUI is part of the Ocean Innovation Norwegian Catapult Centre (OINC), where companies can use an ‘AirBnB’ style system to access laboratories or testing centres.

Gisle Nondal, the centre’s chief executive, explains that OINC aims to play a vital role in helping companies to navigate the road from idea to market. 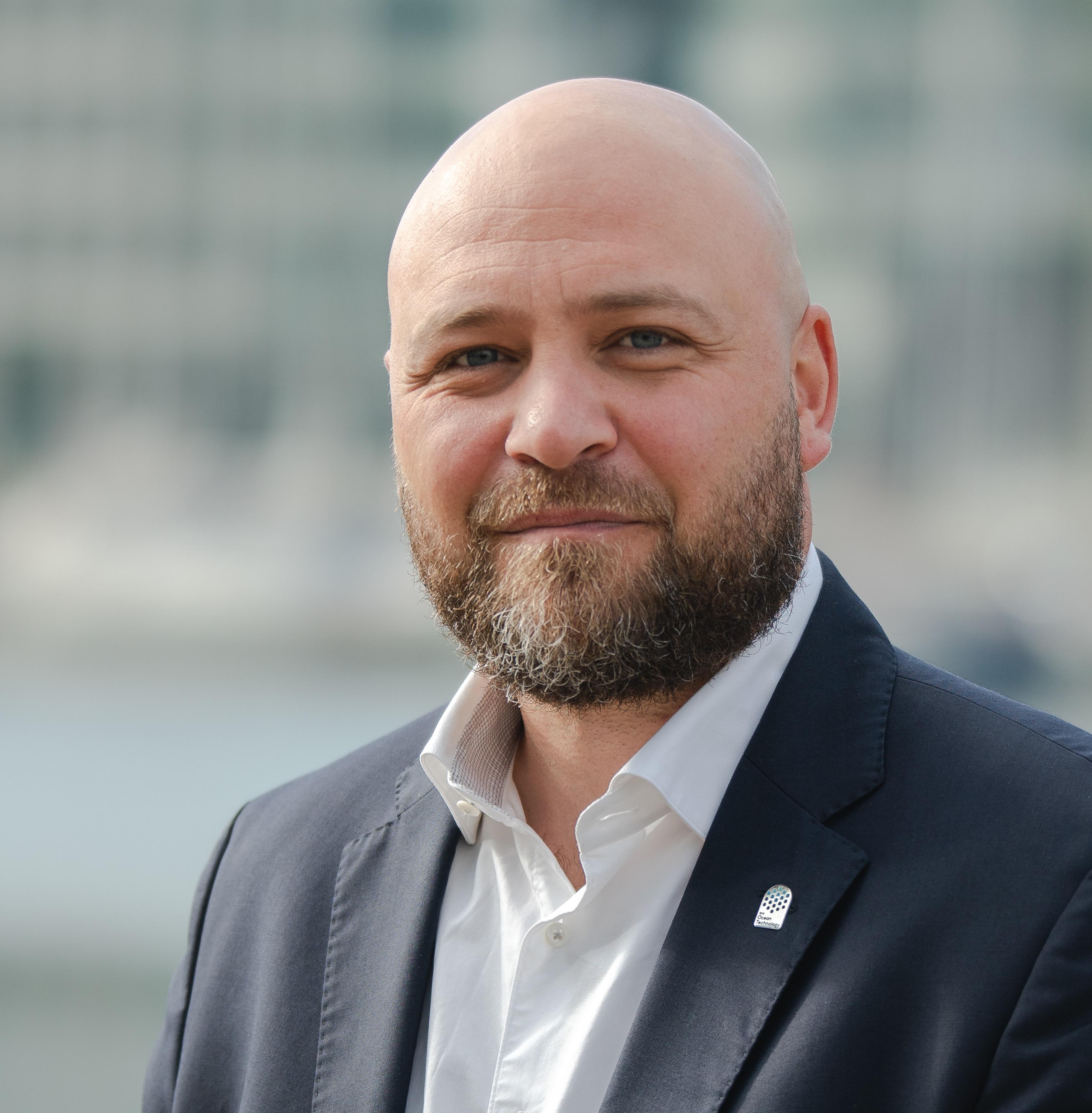 Gisle Nondal explains that the Ocean Innovation Norwegian Catapult Centre acts as a “one-stop shop” for businesses that are looking to develop new products.

“We want to be a one-stop shop for businesses, guiding them through the whole journey so that they get where they want to go,” he explains. “This stretches right from the early design stage, which can involve lego and pipe‑cleaners, through to large-scale prototypes and verifying that the technology works.”

The catapult centre provides access to everything from wave tanks to 3D printers, and Recirculating Aquaculture Systems (RAS) for firms experimenting with land-based aquaculture.

With such a broad range of facilities and competence on offer, it’s no surprise that many companies in the ocean industries are thinking of establishing a presence in Greater Bergen.